1) Describe your journey to becoming an author.

My journey towards becoming an author began from the memories captured during my childhood spent daydreaming in a small shop located in the middle of a big city. As a little girl, I was raised in a family owned, wholesale flower business situated in the Back Bay of Boston where I spent every Saturday morning from the age of five to thirty, enjoying the extraordinary blooms imported from countries around the world. My idea for my first book came from a flower which actually held the scent of chocolate. Using the magnificent colors, shapes and smells surrounding me, I began to envision fantasy lands which coupled with my love of writing poetry, eventually became my children's book series, The Beantown Tales.


2) Where do you find your inspiration to write?

The inspiration to write these stories stemmed from many places including a desire to strengthen the demand of specialty flowers sold from independent flower shops as well as to encourage brainstorming and problem solving skills from kids towards important issues facing communities. In all honesty though, my greatest source would have to be from my two sons, Lance and Ryan. There isn't anywhere on earth where a writer can find a stronger origin of inspiration for their children's books other than through a young person's imagination.


3) Please tell us about your children’s book series, The Beantown Tales.

The Beantown Tales is a collection of children's books written to educate readers about important issues concerning the three main elements of the earth: the environment, humanitarian kindness and endangered animal preservation. All stories possess adventurous worlds as well as child-friendly flowers which aim to entertain and tantalize tummies while empowering young minds to make a change. 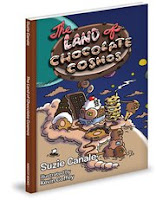 The first two books within the Green segment of the collection are The Land of Chocolate Cosmos (December 2010) and The Popcorn Hydrangea of Poppingtom (September 2011). The Land of Chocolate Cosmos is a story focusing on the environmental issue of preserving our natural resources by revealing a tale about a community distraught when their chocolate making flower, the chocolate cosmos, becomes abused and overused. As the flower begins to become endangered, the magic of the petals disappears leaving the town without their beloved chocolate. 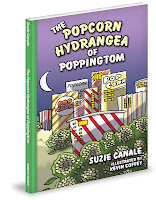 The Popcorn Hydrangea of Poppingtom stays in theme with the first book telling the story of magical popcorn popping flowers which become threatened by disastrous air pollution created by the town's drive-in movie lot. When popcorn production slows to a halt, the community is thrown into action by accepting the help of an environmentally conscious boy, Nicholas, who works to eliminate the problem by writing a new anti pollution act.

Both books are illustrated by Kevin Coffey who has produced pictures for Jerry Remy's Wally the Green Monster books and has also worked as an animator for "The Nightmare Before Christmas" film. The series has recently become award winning, earning "Green Book of 2011" from The Greenschools of Massachusetts and an "Honorable Mention" from The 2011 New England Book Festival. Both children's books have also appeared and received accreditation from the popular floral publications, Floral Management (December 2011) and Flowers& (January 2012).


4) Describe how you chose your publisher.

My publisher and I found one another under unusual circumstances. I wrote The Land of Chocolate Cosmos within two weeks and showed it to my husband, Rick, who sent it through an email to a few of his friends, who sent it to a few of their friends, and so on. Another two weeks later, I received a phone call from the Mascot Books CEO, Naren Aryl, who invited the story to their line of books. Unorthodox as it may seem, sometimes fate will bring you to just the right place where you've always dreamed of being.


5) What other books have you written?

Besides The Beantown Tales series, I have also written a wedding eBook called Walking Down the Cobblestone Aisles of Boston which can be found on "Exotic Flowers" website (http://www.exoticflowers.com) as well as articles for The Examiner, The Patch, and several business websites. I am also in the midst of completing my first murder mystery novel which is really what I have always wanted to write.


6) How do you promote your work? What methods have worked best for you?

Social media has been an absolute must for a couple of reasons. For one, this form of advertising is free, making it imperative to utilize when managing budgets and profit margins. Second, these sites are expansive, bringing your words, ideas, and visions to unimaginable places, increasing aspects of sales, exposure and your chances of success. You just never know who is watching or reading which in this case is a great thing!

I've also had overwhelming support from friends and family who have been the driving force behind the series. Signings, fan pages, holiday book buying-- not one of these areas would have ever been successful without their help.

My plans for 2012 include the third Beantown Tales release, The Candy Roses of Cape Care which will complete the Green segment this summer. The story is themed after the issue of water pollution when an enchanted coastline which flourishes with candy growing roses is nearly destroyed when unwanted tourists litter the shore with candy wrappers. So far, this is my favorite story as it takes place in my favorite area of the world, the BEACH!


8) What is your definition of success as an author?

Success can come in many forms for many different authors. For some, it's a crowded book signing, a long list of retailers carrying their name or a generous royalty check received in the mail. For me, it's when a letter arrives from a young reader who wants to start a recycling box at home because they feel that they can make a difference or when I visit a school and the kids ask me to teach them, not about how I write my books but how they can write their own. Their excitement is incredible. There really is no better measurement of success than that for me.


9) What advice would you offer to aspiring authors?

The first and last thing that I tell my writing students is that Dr. Seuss was rejected from publication 27 times before his manuscript was accepted for publication. If Dr. Seuss had given up, where would we all be now? You can't ever give up, just keep trying! 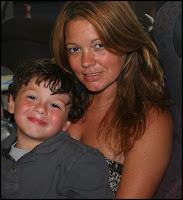 Suzie Hearl Canale grew up in Andover, Massachusetts and is a graduate of Salem State College. She began writing as a children's book author after a twenty-five year career in the wholesale floral industry in Boston where she was inspired by flowers named after child friendly foods. She developed the concept of The Beantown Tales which are series of books geared towards educating children to make positive changes within the key concerns of our society. Suzie is the recent recipient of the Green Difference Award for Green Book of 2011 by the Massachusetts Green Schools Organization as well as an Honorable Mention in the 2011 New England Book Festival children's division for her first installment of the Green Series, The Land of Chocolate Cosmos.

As she continues her career by writing books, articles and blogs for online websites, magazines and local businesses, she is also busily raising her two sons and volunteering for the Mass Bay American Red Cross chapter as a member of the Disaster Relief division.

Twitter @SuzieCanale
Posted by Unknown at 12:00 AM No comments: 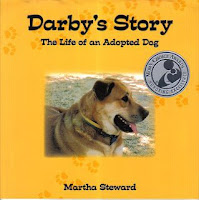 1) What inspired you to start writing children’s books?


My son signed up for the USMC and he had completed all of his training for his MOS. The same year our family dog, Darby, was in his senior year of life. Between the worries of my son's pending deployment to Iraq and the knowing Darby would pass away, the two most important treasures of my life were in my heart falling apart. Darby passed away over rainbow bridge and through the grief I composed a celebration of life to capture a young boy and his dog growing up.


2) How important is animal adoption?

Adopting an animal great and small is rewarding to you. When you bring home your new family member there is a deep sense of doing something good. The adopted pet knows you have saved him, and in return there is loyalty beyond anything you can imagine. Adopted animals are grateful.


3) Which came first: a love of animals or a love of writing?

The love of animals. Animals' unconditional love, expressed between a child and a animal, holds a lesson with a child.


4) What books have you written? Where can readers buy them?

I have written two books of a three-part series. Darby's Story and Bangle Bear both received a Silver Medal from the Mom's Choice Awards for Best in Pet and Animal Care. The third book, Finding Your Way Home, is about opening your home to two 2 stray kittens, a little duchy mix, and my son.


5) How did you find your publisher?

I asked several friends, who they thought would help me produce a quality product.


6) How have you promoted your work? What strategies have been the most effective?


There are two intentions I have for the books: inspiring pet adoption and child/adult literacy programs. I have provided the books for reviews, which have been extremely positive. In turn the articles have been blogged and posted on book sale website.


7) What advice would you give to budding author/illustrators?

Editing is very important, so do your level best. Remember, no one else is perfect, so be aware you may find an error or two. Writing styles are individual, no two persons are the same. Be yourself.


8) What is your definition of success?

For me, it's about doing my best in any situation. It is also having my books encourage would-be pet adopters to read and understand that pet adoptions are a benefit to individuals and society as a whole. Lastly, success to me is seeing more families pick up books and rediscover that reading is a joy.

I will be working on marketing the books and at least finishing the draft of the third book. I will also continue  working with literacy programs.

Martha Steward lives in Northern California on the family farm. The animals great and small that live on the farm are adopted. Her life experience inspired to write a series for families on pet adoption, blended family issues, and the courage to be a Marine Mum. Martha's two books, Darby's Story and Bangle Bear inspire pet adoption. Both are Mom's Choice Award Silver Medal recipients for Best Books in Pet and Animal Care. Each book goes through the process of finding the pet best suitable for your family as well as the benefits to spaying and neutering your beloved pets. Each animal sets an example of blended family issues, the different personalities, and their likes and dislikes. The stories are warm and funny, families will laugh at the conversations the pet have and the outrageous ways Bear teaches her human pets. On a special note these books help children with families members serving our country and the concerns for deployment. These are warm and humorous stories for families to read together.

Martha's second passion is supporting literacy groups for children and adults. With “March 2012 Read Across America”, my goal is to discover positive websites and articles to help parents and their children. Reading is a joy. Books are an adventure and they allow the readers to escape and become different people. Writing has helped me overcome my dyslexia, and I know there are children who need encouragement. They, too, can overcome their challenges and find the pleasure to read and write.