1)      Welcome to The Writer’s Block! Describe your journey as an author/writer. How did you get started? 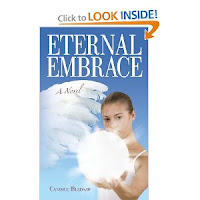 Thank you so much for giving me this opportunity to tell my story. This is my beginning. You are witnessing my beginning baby steps. I hope this may help someone.

I started out writing poetry when I was about thirteen to deal with the troubles of my childhood. I did this instead of turning to drugs and alcohol. I've always been creative to various degrees since I was four when I discovered I had a talent at drawing. It wasn't until I was nineteen when I started working for a book distribution warehouse; Ingram Book Company, that I discovered I could possibly make writing a career choice. I had the active imagination for it.

Working for a book company that housed well over ten thousand titles, I saw everything from main stream to self published. Some of the stuff that was written wasn't very good and some of the illustrations in these books weren't very good either. I thought maybe if a publisher could publish this...maybe I could do something a little better. That's when I decided to buy a few books on writing and learn the business a little further. My first few books were children's books. I wrote and illustrated three but honestly, I'm not sure how to present them to send them to a publisher. I'm still learning that process.

I wrote Eternal Embrace about ten years ago. It started out as a vampire romance. It had some good points but it didn't feel right to me. It felt forced. It wasn't until 2008 when I started reading the "Twilight Saga" that I discovered my voice. Yes, I know a lot of people have various opinions about the saga but when I read the books, I was learning how I wanted to write. It was very inspiring to me. And I honestly enjoyed the story.

Then I had a dilemma. I didn't want to write about vampires anymore. It seemed like a spent topic.  I still liked my title Eternal Embrace. At the time I came up with it, there were no other books with that title I could find. I started thinking about other beings that were eternal. Angels came to mind. I found a verse in the Bible, Genesis 6:2-That the sons of God saw the daughters of men that they were fair; and they took them wives of all which they chose. It sparked the whole background of the angels I created in my novel. I shaped the heroine after myself, sticking with the "write what you know" belief. I was so inspired, I wrote the first draft in five weeks. I balanced it between work and raising two sons.

I came up with my own formula to structure my story around. I broke it up into sections so I could map out what I wanted to write. Then when the whole book was mapped out, all I had to do was fill in the blanks. I wrote during my break times on pieces of scratch paper and wrote after I put my sons to bed. A few months later, after several kind rejections (it doesn't fit our needs; nice story-send it somewhere else; we are so swamped right now we can't possibly take on a new author-rejections like these), I decided to go the self publishing route, iUniverse.com. It is a reputable company and I've seen many of their titles run through the book I wanted to let the publishers know how serious I was, how much I believed in what I wrote. I also wanted to make the investment in myself. So, after the editing, re-writing, and more editing, Eternal Embrace was born March 30, 2010, my first creative work. I was proud. But I had the next steps....marketing. Not my forte. That's how I started. I'm still new. I still have much to learn.

I like to think I specialize in children and young adult. I feel comfortable writing in this genre.

Eternal Embrace is my first published work. It won the Editor's Choice Award through iUniverse.com.

4)      Tell us about Eternal Embrace. What inspired you to write it? Where can our readers buy it?

It's pretty much covered in question one. It can be purchased in various online book retailers. Amazon.com, Barnes & Noble.com and iUniverse.com

5)      Describe the steps you took to publish your novel. Who is your publisher?

iUniverse.com and Kindle Direct Publishing. I hold the rights to my novel.

6)      Is being an author a career choice for you? Why or why not?
At this time, it is more of a hobby but, of course, I'd like it to eventually become a career. I still have to keep my day job.

7)      Tell us about your current projects and what is next for you.

I'm currently working on the second book that is the sequel to Eternal Embrace. When I decided the book was going to be about angels, and I was truly inspired, I had enough in my brain to work out a trilogy. So, there are two more books to follow Eternal Embrace. I also have a few more story ideas after the trilogy is complete. Even if I'm only writing for myself, I plan on continuing to write. It's become more therapeutic to me than anything else.

8)      How do you promote your work? What strategies have been the most successful?

9)     What advice would you give to budding writers?

Perseverance and persistence. If you truly love to write...don't ever give up. Even if people are telling you your writing is no good and you are a failure because you haven't sold very many copies. Never give up. Always continue to learn the process and believe in yourself.

I feel successful just completing a novel. Just to be able to say that I had the discipline to sit down and complete a project feels like success to me. It's more than a lot of people in the world can say.

My name is Candice Bledsaw. I was born sometime in the seventies when disco and bell bottoms were cool. I'm an Aries. I'm a country girl. I believe I can survive the coming zombie Apocalypse. I love Zombie, Vampire, Romantic, Comic Book, Angelic, horror movies. Not all at the same time. I have been told I'm a very silly girl. I am also an artist and I work in a variety of different mediums, whatever inspires me at the time. I have also just received my first blue belt in Hikari Ryuza Bujutsu, which I'm very excited about. I worked so hard for it I almost died! Just kidding but seriously, it wasn't easy.

After writing Eternal Embrace I have a new passion for studying angels. I have a strong belief in God and Jesus and I feel I am still learning how to listen to His voice. I'm not overly religious though. I respect other peoples belief systems and I feel there are many ways to God. I have two sons, been through two divorces; (one civil, one not) and I am still on the path to discovering my true self. I feel I'm on the right path this time. Life is a learning process to our true destinies!