1)  Describe your journey as an author/writer.

It has been a straight whirlwind. I’m having a hard time keeping dates and times in order. It all began on an unassuming Sunday back in the fall of 2010. I was sitting in the church listening to the Bishop preach and he said that God was telling him that he wanted someone to do something but no one was asking for the vision. I began to start praying what God may want me to do and I immediately heard a voice in my head say, “Write a book.” I began sketching out the plot to Protostar right there in church on the back of the church handout. I went home and researched how this author thing works and began to create the outline for the first book of The Star-Crossed Saga series. After that, I started writing and three months later I had a 99 thousand word manuscript to start editing and submitting to agents. After a few submissions, I decided to submit my work directly to Firefly (a local publisher here in Atlanta, GA). I sent the first five chapters and they loved it. One year later, Protostar was released and I’ve just been humbled by the overall response to it.


2)  Do you specialize in any particular genre(s)?

Um, I am a big fan of Young Adult. I feel that young people love to sink their teeth into a good, fresh, inventive story. They are not afraid to believe in fictional characters that exist in imaginary worlds. They don’t ask the silly questions that some adults do, but they explore the stories and just enjoy the ride. 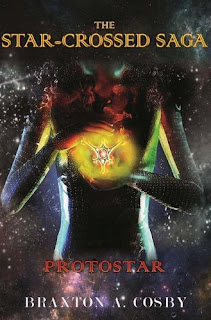 3)  What is The Star-Crossed Saga: Protostar about?

At its heart, Protostar is the beginning of a story that encompasses the ideal of pure love. It’s the kind of love that happens between two people that ordinarily have no reason at all to fall in love. Out of pure chaos and impracticability, love is created. Once it is, these two people (William and Sydney) find themselves plunged into a place of fatalistic decisions and scientific mayhem. It’s the birth of a story that is a new spin on the doomed love made famous by Romeo and Juliet, but with modern teen themes and real-life scientific applications. It will introduce the main and secondary characters of the series and the reader will get a sense of the setting, timeline and depth and impact of the decisions they make going forward.

4)  What else can we expect in the future from The Star-Crossed Saga book series?

You can expect the next book to pick right up where the first one (Protostar- cliffhanger ending) left off. There will be more characters introduced, back stories revealed, new worlds explored, story arcs connected, and even more twists than the first novel. The sequel is going to be bigger because the detail the surrounds the characters has to be explained in order to set up the third book. Fans of the first will not be disappointed. Also, William’s story really opens up and we get to see him in both of his roles of a bounty hunter and a prince.

5)  Where do you find inspiration for your novels?

Straight from God. I usually create outlines for my books that have maybe one or two lines of story. Then, as I start writing, the inspiration comes and before you know it, I’ve written 10-15 pages of text. I also love to watch movies. I write with a level of rich detail, so that the images in my mind come off the page for the reader.

6  )How has your uncle, the legendary Bill Cosby, influenced you as an author?

He is an amazing storyteller. All of his standup routines and creative ideals have matriculated down into my genes as well. He is also very supportive of my work and has always encouraged me to set goals and press towards meeting them. He has really gotten behind Protostar and we are currently planning co-book signings for his new book and my novel.

7)  How do you promote your work? What strategies have been the most successful?

8)  What advice would you give to budding writers?

DO three things: Find the vision, receive the inspiration and believe in it no matter what. A few bad reviews do not spoil the entire bunch. Staying with what you stand behind is an amazing place to be.

9)  What is your definition of success as a writer?

Seeing my book get reviews from people that never knew anything about me and just love every word I put into text. Those people who don’t have anything to gain from liking or disliking my work and just really getting excited about it and telling me they can’t wait for the next book. Of course, a big publishing book deal wouldn’t hurt either. I would love to do this exclusively one day so that I can get the many stories I already have locked away into the hands of the public.

BIG THINGS! Starting with the co-book signings and then working through my new series (secret) that I started on while The Star-Crossed Saga continues to gain momentum. God is going to make this a fabulous year.

Braxton A. Cosby is a dreamer with a vision of continuously evolving and maximizing the untapped potential of the human spirit. Braxton received a lot of his inspiration from watching the accomplishments and exploits of his famous uncle, comedic legend Bill Cosby. A physical therapist by background, Braxton received his Bachelors, Masters, and Doctorate from the University of Miami. Braxton’s fascination of science grew into an obsession of Sci-fi and on one unassuming Sunday, this self-proclaimed romantic decided to pursue a “calling” to create a new genre of writing; Sci-Fance- mixing science fiction and romance. Braxton lives in Georgia with his wife and two children. He believes that everyone should pursue joy that surpasses understanding and live each day as if it were the last.