Medium Has A New Platform For Writers, But This Jury Is Still Out... 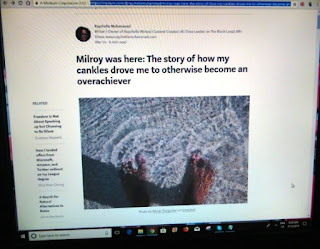 I am trying out Medium's new platform. If you haven't heard, they are taking a different approach to pay-for-performance writing. Creatives can either post articles for the general public in exchange for building a following or post content exclusively for Medium's paid members and earn based on your article's popularity.

It's too soon for me to tell how lucrative it might be, but I have been able to import evergreen articles from my portfolio. This platform seems to be a pretty cool way to hone your skills, test out your content, and build your following.

Yesterday I posted a long-form personal essay that wasn't "quite the right fit" for the publication I pitched entitled, "Milroy was here: The story of how my cankles drove me to otherwise become an overachiever." Thought I would share an excerpt of it here.

If it catches your fancy, consider reading the entire post on Medium. If you don't want to join Medium, let me know in the comments below. If I get 25 or more requests, I'll post the essay in its entirety here. Either way, I appreciate your continued support!

Keep your pen to the paper! Remember, inspiration is everywhere...


*     *     *
"Out of nowhere, when I was 10 years old, my left foot ballooned. It wasn’t the result of an allergy attack or a sports injury and I didn’t have a known chronic ailment as a precursor. For reasons unknown, I had developed this swollen foot and calf and nobody could tell me why.

"This would be the beginning of a journey into endless prodding, needle pricks, and blood tests which yielded very little in the way of a reason why it happened. What I did know was that on top of being the tallest and thinnest Black girl in my class, I was now also the weirdest.

"Being deformed all of a sudden immediately began to shape my self-worth. There was something wrong with me and maybe I wouldn’t be accepted for who I was when people found out. Dressing the way normal people do in shorts, dresses, sandals, and flats put my feet on front street. I had to find a way to compensate for my flaw.

"I was well into my adult years before I could give my condition a name. Doctors scratched their heads trying to figure out how I could be on the planet for over 10 years before it manifested itself. They called it lymphedema, which is just swelling due to a blockage in my lymphatic system.

"Trying to explain my diagnosis to the average person, especially fifth and sixth-graders, only caused me more angst and frustration. Now I know that what I have is called Milroy’s disease. It is a congenital defect and if anyone wants to know more, I can just tell them to Google it..."

Posted by MayMay at 8:43 AM No comments: