Re-Post: Getting on a Schedule to Publish More Books 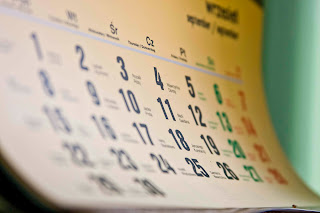 "Getting on a Schedule To Publish More Books"
(Posted on September 12, 2011 by Ruth Ann Nordin)

"Sometimes it’s hard to get that book started, let alone finished. I might have a good number of books under my belt, but after the hectic summer I had, I lost a lot of wind out of my sails and couldn’t get back into writing anything. After talking to a couple of authors and doing some reading on books for helping authors, I have formed a schedule plan that is finally working. I want to pass it along in case someone else might benefit from it. If anyone has any tips to add, please do.

For example, I plan on publishing six books.

2. What is the word count goal for each novel?

For example, mine is 70,000 words, which is my average on most of my books, especially historical western romances which is my focus for next year. It does help if you’ve written enough where you know how long your books typically are, but I think an estimate would work well.

3. When will you release each novel?

For example, I want to publish a new novel on an average of every other month. I’d like to start in January (to hit the “I just got an eReader and want to buy books!” crowd). Even if I finish a novel three months in advance, I will sit on it until the scheduled month comes up. The reason this is a good idea is to have as much of a steady and predictable income as possible. Granted, some books sell better than others (and it’s hard to tell why), but you can increase your chances by being on a consistent schedule with your production.

I know someone who wants to publish a new book every six weeks but will take the summer off since summer is a slow sales time, so do it however you want.

4. Back up and mark out on the 2012 calendar of the anticipated release dates.

Even if you have no title for the book, put in Book #3 on the month you expect to publish it. So for me, since I’m starting in January, this will be May.

5. Then back up and figure out how many months you should devote to editing and proofreading.

If you have a concept editor and a proofreader who can work with you on a timely schedule, you might be able to get it down to one month, but I like to err on the side of caution and plan out two months. (I always do concept editing before I hand over the book to a proofreader to work out as many kinks as possible early in the polishing up process.) The nice thing about hiring outside help is that you cut down the amount of work you do so you can focus on writing more books.

6. Then figure out how many words you need to average every day to reach the first draft goal.

What really helps with this is having a word counter where you can mark your progress. Under the cover of my work in progress, I put up a word goal and add to it when I get something written. I use writertopia. You can use the link on your blog to mark your progress. http://www.writertopia.com/toolbox This way you get a visual of your progress. You can see what I do on my blog if you want an example. Look to the right side. Having the cover to go with it also works as a motivator since the book seems more real if the cover is there.

I started in August for my January release. My goal is to publish the first book on January 1, but if it’s not up until the 15th, that’s fine. As long as it hits in that time frame, I’ll be off to a good start. I am aiming for 1000 words a day, though I will allow for 500 words (or 1000 words every other day if real life kicks in and I can’t write every day). Currently, I’m at 26,000 words, and it’s September 10. So it’ll take me at least 44 days to reach my first draft goal. So I will probably be done between October 24 to November 12. So depending on when I finish, I will have between one to two months to get the book out by my estimated release date Jan 1 to Jan 15.

Meanwhile, I started my March 2012 release this month at 500 words a day. When I finish the January release, I will bump this word count to 1000 words a day. I hope to finish the rough draft of this novel by December 15."

Keep your pen to the paper! Remember, inspiration is everywhere...
Posted by Raychelle Muhammad at 9:05 AM No comments: